Image of a Second Life replica of the Golden Gate Bridge shared on a CC BY-SA 2.0 License by Torley Linden

My Grandma Has No Idea What Gone Home Is 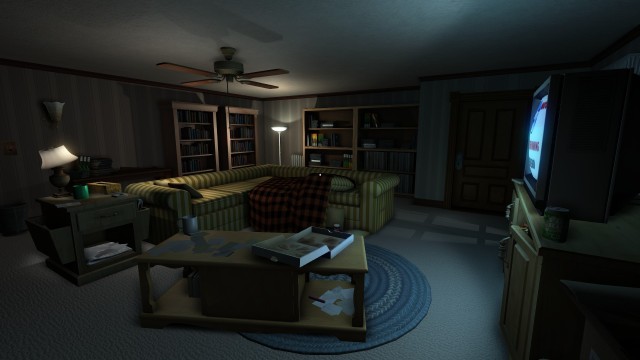 My Grandma has no idea what Gone Home is even though she’s one of the biggest gamers I know.

She was one of the first people who taught me what it means to play. Our first game was tic-tac-toe, which she never let me win until I figured out on my own how to end each game with a tie.

After that, she proceeded to teach me card games: Uno, Go Fish, Crazy 8s, King’s Corner, and, much to my mom’s horror, Poker and Blackjack. As I got older, she eventually introduced me to a variety of board games including scrabble, another game she’d never let me win.

So why is it that this woman who cares so much about play is not talking about games the way that we do? Why is it that my Grandma will go to the theater and see Her, a move involving sex with a sentient operating system, but she hasn’t even heard of Gone Home?

The thing is, my Grandma actually loves videogames. The first program she had me put on her MacBook was solitaire. The only reason she decided to buy an iPad is because she wanted to play Words with Friends (her new Scrabble surrogate) with the rest of the family.

Now, she’s always up for trying something new. Word games are usually her favorite, like Puzzlejuice and Spelltower, and Letterpress. My Grandma has even grown to enjoy the other games I show her like World of Goo, Hundreds, Eliss, and, yes, Flappy Bird.

And still, despite all this, she’s NEVER heard of Gone Home, which has won numerous awards and created a constant stream of articles, essays, and personal testimonials. So why does she have no idea this exists?

It’s true that my Grandma doesn’t necessarily think of herself as a gamer. She sees herself as someone who plays games. She also doesn’t call herself a movie watcher, a book reader, or a car driver. When she’s playing, it’s something she’s doing, NOT who she is.

When she hears the world “gamer” she thinks of what the mainstream media says they are: deadbeats, losers, and creeps. “Gamer,” to most, has become a dirty word. Gamers play World of War Craft, Grand Theft Auto, and Call of Duty. To my Grandma, and to many others, gamers are responsible for school shootings.

My Grandma doesn’t even see what she plays as “videogames.” Like the word gamer, “videogame” is a scary word for some people. This is so ridiculous when you think about it for even a second. She knows what a game is. She knows what a video is. That silly space in between the two words brings about a slew of clichés that she doesn’t want to be associated with.

It’s easy to pass the blame on this one. Yes, Fox News isn’t doing anything to help promote the public image of videogames. But even outlets dedicated to gaming fail to cater to people like my grandparents. Never mind grandparents; they fail to cater to anyone without extensive videogame literacy.

Again, it’s easy to say the fault lies with bigger game sites with less inclusive audiences. There are definitely problems there, but that’s not what I’m interested in talking about right now.

When I really thing about it, the real reason that my Grandma doesn’t know about Gone Home, is me.

I talked earlier about all of the games I put on my Grandma’s iPad. None of them have what most would consider a narrative. For some reason, there’s this weird space in videogames now where it seems like everyone we know is playing; not everyone is experiencing story.

My Grandma and I aren’t sitting around a table discussing her favorite game designers. We’ll talk about authors and directors and musicians, but never games.

Please don’t think I’m against games without narrative in any way, shape, or form. I put off writing this numerous times because I’ve been playing marathon rounds of Threes.

The truth is, I’m embarrassed. I have succumbed to being ashamed of gamer culture instead of sharing the videogames I love. It is easy for me to sit on Twitter or Tumblr and spew rants about the problems surrounding videogame criticism. Instead, I should be telling the real world why games are so important to me. I’m so afraid of how I talk about videogames in the real world that I remain silent. That has to change.

I want to admit to my room mates that the reason I was crying while I was looking at my phone that one day was because I had just played Jason Rohrer’s Passage.

I want to thank my mom for buying my Pokemon Crystal just so I could play as a girl trainer.

I want to explain to my film student peers that Tell Tale’s The Walking Dead has made me more afraid of humans than zombies.

I want to tell my dad that after I played Heavy Rain I understood how he felt when he briefly lost me in Target as a kid.

I want to show my girlfriend how Journey has helped me reconnect with my faith.

I want my Grandma to know what Gone Home is, because it’s the first videogame I’ve ever played that felt like it was made for someone like me.

Next week when I go visit my Grandma in Florida, I’ll be hauling out my laptop to finally show her Gone Home, right after she beats me in another round of Words with Friends.